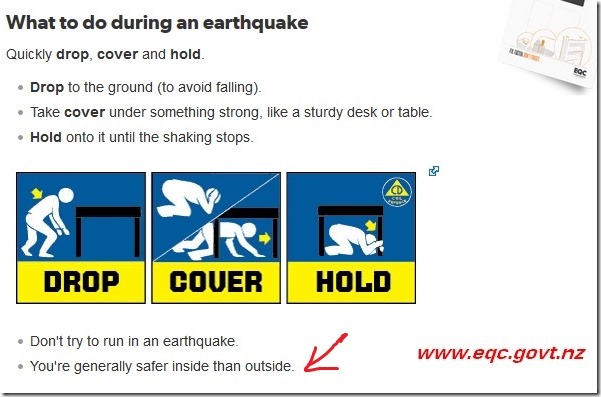 University of Southern California has a website dedicated to the notion – http://www.dropcoverholdon.org/

As Kathmandu falls in a high seismic zone, school children and adults were trained on how to deal at the time of earthquake by various NGOs and INGOs. As the professionals were trained in developed countries, they brought ‘Drop, Cover and Hold’ technique to the Nepali people. The following screenshot is a video of such training by Nepal Risk Reduction Consortium, a UN funded project. 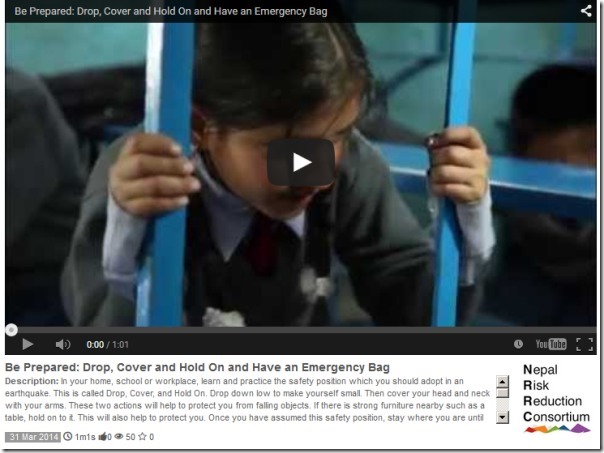 Why Drop, Cover, and Hold failed ?

Nobody can deny that ‘Drop Cover Hold’ is the best practice. But, it is good only when the building is designed to resist an earthquake.

When the building is made of unreinforced masonry, or if the columns are weak the whole building might collapse and crush the person inside to death. That had happened to many buildings in Nepal during the April 25 earthquake. For example, the 7-storied school building in the following video has collapsed as if it was a controlled demolition. Thankfully it was closed on holiday at the time of collapse saving more than 500 students.

The DCH awareness program was held in about 2,000 schools in the 11 districts in Nepal by NGOs like NSET and Red Cross Society. In addition to the school program, radio, television and print media had also conveyed the DCH message to people.

These children were taught to get cover under bed, desk and not to run. Those who didn’t care to follow the instruction ran out of houses and survived.

In case of the house built on soil mortar, having heavy floors and roof, and not-made-to-withstand earthquake, DCH is the worst suggestion anybody can give. No table or beds can withstand the heavy loads of floor, roof or the masonry wall of such buildings. That was the case of the most of the villages and some parts of the cities in Nepal.

Why was Drop, Cover, and Hold recommended ?

There are certain conditions for the DCH to work. Some of the conditions include:

There is an example on the April 25 earthquake when DCH would have worked: A woman was killed outside the Horizon Apartment complex by a falling object. If she were to take cover inside, she would probably be saved as the apartment didn’t fall down.

Taking DCH into consideration, an Israeli designer has designed a school desk that can take a load of up to 10 tons. 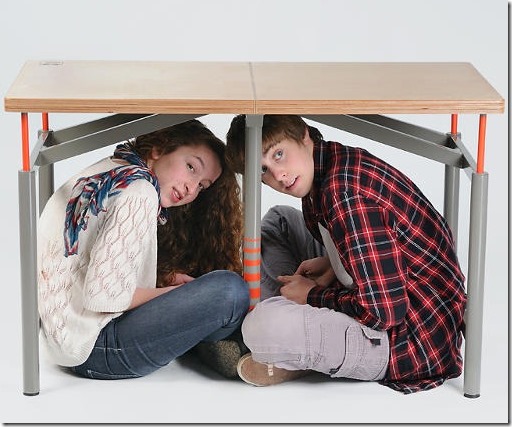 Although it has failed miserably in Nepal, DCH is still the best practice during earthquake. If economy could permit, all the non-earthquake-resisting buildings should be demolished and replaced by light weight earthquake resisting building. But, that might not be practical in current situation. My suggestion:

We need to build better structures and practice DCH during future earthquakes.